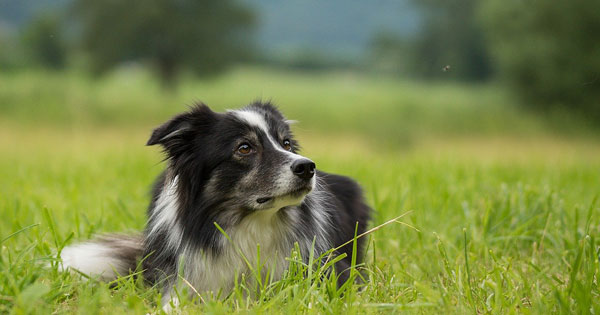 Why do dogs eat grass? Especially when you are already feeding them the best of food as recommended by your vet and top pet food producers?

Many dog owners may have thought this to themselves, as they have taken their pet to the park, and thrown them a ball to fetch.

But instead of collecting the ball and coming back, they stay where they are, and take a nibble of the grass.

What are you doing boy? Didn’t I feed you enough today? Did someone drop their takeaway on the way home from the bar last night?

Why is he doing that?

The truth is, no one knows for sure. There have been studies done, and some interesting theories have been put forward, but as yet, none have been proven.

It could be that dogs are not just eating grass to fend off hunger, there could be more interesting reasons behind their strange behaviour.

Let’s take a look at some of the popular explanations that have been considered.

First of all, it isn’t just our domesticated pets, that sometimes eat grass. The same behaviour has been observed in wild dogs.

After all, it is in their instinct to hunt and scavenge for food. Eating grass could be inherited from our pets’ ancestors, from long before they were domesticated.

The act of eating something that isn’t food, is called Pica, and it is a disorder. So, it isn’t a surprise that many owners worry, when they see their dog, eating grass.

Many owners also say, that their dog vomits, after eating grass. Is the grass making them vomit? or is something else going on?

One theory, is that a dog may have an upset stomach, and has deliberately eaten the grass, so they will vomit, in order to get rid of something they have eaten.

The blades of grass could irritate the dog’s throat, and cause it to be sick.

However, some people despute this, and wonder – how would a dog know to do this? They also point to the fact, that less than 25% of dogs, vomit after eating grass.

On the other end of the scale, is the idea that, rather than trying to make themselves sick by eating something bad for them, dogs are actually getting some goodness from the grass.

Grass contains vitamins, minerals and nutrients, that will be good for a dog.

Other people suggest, that dogs may eat grass, because they are bored. If this is the case, the dog could need more interaction, with his human family or with other dogs, both indoors and out.

There are also food puzzles, that you can buy, that will keep your dog mentally stimulated, as well as well fed.

Perhaps man’s best friend might be trying to get our attention, by doing something we disapprove of. They love our attention, and miss us when we leave the house for work everyday. If they feel neglected, and have learned that eating grass gets their owner’s attention, well, they may act out, just as a child sometimes does.

Another theory, also has to do with psychological reasoning. Perhaps eating grass, is comforting to dogs, just as chewing fingernails or fidgeting with a biro, could be for us humans.

On the physiological side of things, It could be that dogs, are not getting enough fibre in their diets. Grass is a good source of fibre, and dogs may need more roughage, in order for their digestive systems to function efficiently.

In one study, an owner who watched his dog eat grass, and vomit, for seven days in a row, put his pet on a new high fibre diet. The dog stopped eating grass after three days.

As I mentioned, none of the theories have been proven, and it could be as simple, as dogs just liking the taste of grass – particularly in the spring, when it is fresh and juicy.

It is important to know, whether there may be chemicals on the grass, as this will ,obviously, be detrimental to your dog’s health.

Some pesticides, or herbicides, could be dangerous If your dog ingests them.

You should take your dog to the vet, if he is turning down his normal food, but eating grass, or if he regularly vomits, after eating grass.

So, there you have it. There could be a number of reasons, why dogs might eat grass. Right now, we don’t know for sure.

Eating grass is not dangerous in itself, but It is important to make sure, our pets are not damaging their health.

So, if they regularly vomit after eating grass, make sure they have a visit to the vet.